All over Thailand, we must endure the rainy season and here in Pattaya it usually lasts from May to September.

Can be different in other regions so check ahead.

OK, it does not mean you cannot enjoy a great round of golf on one of the 260 championship golf courses around the country, but just be prepared.

In fact, instead of playing on scorched brown fairways, the grass looks at its best, and plays well too after a soaking.

Recently we went to play the Ocean course and aptly named Lakes courses at Phoenix Golf Club in Pattaya.

Halfway through the round the sky turned black and the familiar rustle of the leaves on the trees warned us that a storm was approaching.

Luckily for us, we were putting out on the 3rd par 4 on the Lakes course, so we’re able to drive in our cart quickly to the nearest drinks kiosk.

Then the heavens opened and one of the biggest thunderstorms followed.

One clap with a massive flash was right on top of us and everyone jumped. 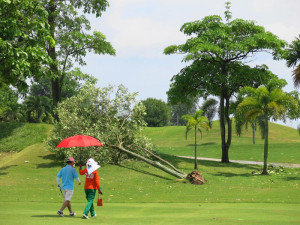 Over the next 20 minutes, we could see the greens and fairways slowly turning from puddles into real lakes.

Our caddie who had worked at the club for five years said she had never seen anything like it.

Eventually, it stopped raining and almost immediately the sun shone.

My intrepid playing partner on his last game of golf before heading home to the UK, suggested at least we try to restart and finish the last five holes.

Caddies duly wiped down the carts and we headed for the 4th tee.

OK the fairways were a bit wet, and we got some great pictures of the water socked course, but by the time we reached the green it had dried out.

In fact, we went past one bunker by the green and heard a sucking noise and witnessed the water draining out through a plug in the middle of the bunker, like water leaving a bathtub.

The bottom line was by the time we had played two holes, the course was almost back to normal, just 30 minutes after the storm had passed.

I spoke to the general manager, and he told us that in fact with recent improvements to their Ocean, Lakes and Mountain courses, drainage on these courses were even quicker.

Many Thai courses are built on sandy areas, so it also helps to drain quickly, aided by the sunny weather.

Basically, for all you golf vacationers perhaps used to course closures back home in say Europe, here in Asia they design their courses with massive drains to cope with these sudden downpours. 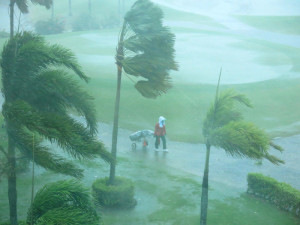 A much worse storm, actually a mini hurricane, hit Pattana Golf Club 45 minutes north of Pattaya during last year's international press fam trip and trees were being uprooted and the course was drenched.

Actually, we had a great lunch in the clubhouse and after the storm passed the club got all of us out to view the course in buggies. 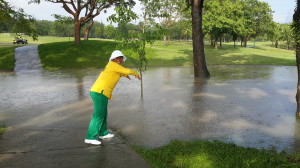 At this time of year Thailand’s golf courses do get rain, but it normally only comes in short bursts often during the midafternoon.

So, grab a cold drink at the kiosk and sit it out and then continue on.

Remember that most clubs will supply a waterproof cover for your bag but might be better to bring your own.

With the courses emptier at the moment due to the pandemic, and the great rates offered at low season, it is actually a good time to play in Thailand.

Oh, and the courses like the rain too. Green grass and good conditions!!! Say no more!!!